The Brother SE600 2-in-1 sewing and 4×4 embroidery machine allow you to easily embroider and sew. View your embroidery design in full color on the large, 3.2 “Save Smart Color LCD touch screen display, and review your design modifications on the screen before sewing.

It is an affordable sewing and embroidery machine which is easily affordable, reliable, efficient, and functionally prominent. Brother SE600 tops all sewing machines in terms of its low cost.

Anyone interested in sewing and embroidery can easily buy this machine. Many great features allow you to edit and display your embroidery designs before applying them to your projects.

What are the Brother SE600 accessories included?

If you buy the Brother SE600 sewing and embroidery machine, here is what you will find in the box:

You need a stabilizer before you start and also need to buy embroidery thread.

Brothers make many different models of sewing machines that make it difficult to choose one. Here, I will look at the main features of the SE600 sewing machine for easy decision-making.

There are over 100 built-in stitches that can help you show off your sewing skills with various sewing patterns – 103, to be exact.

This feature makes the Brother SE600 sewing machine an ornament among other machines. Most sewing machines do not have many built-in stitches.

One of the most important things that come to your mind when you are thinking about choosing an embroidery or sewing machine is how user-friendly it will be. If you are buying a brother SE600, you do not need to think about it.

Many people find it difficult to thread the needle manually, so the brother has the best solution. The automatic needle threader will line the needle’s eye, so you don’t have to worry about it.

The Brother SE600 sewing machine is a versatile machine that can perfectly handle both embroidery and sewing.

Whether you are using it for general sewing work or embroidery, Brother SE 600 sewing can perform all the necessary work without any hassle. 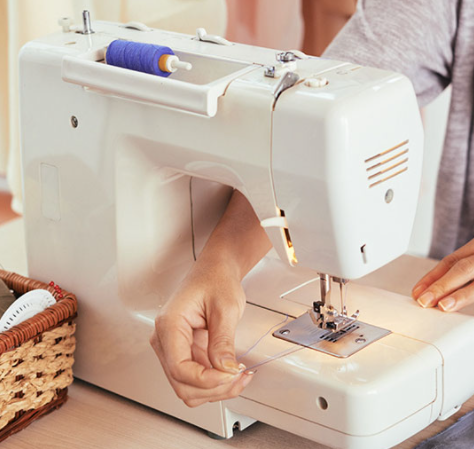 The sewing machine has a drop-in thread so that the small door can be opened only near the needle plate so that your thread can be inserted.

You can easily track and refill the amount of thread available because it is directly in your sewing field.

The sewing machine has a drop-in thread so that the small door can be opened only near the needle plate so that your thread can be inserted.

You can easily track and refill the amount of thread available because it is directly in your sewing field. 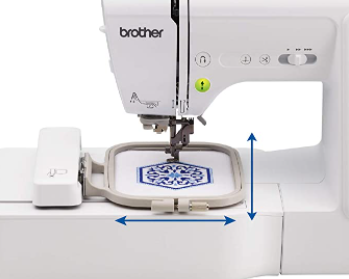 The machine embroidery area is large, so you can easily decorate your design on fabric. The SE600 is a perfect embroidery machine if you want to use a sewing machine at home.

It features a free sleeve to create sleeves, cuffs, necklaces, and other accessories that are not readily available.

Not so with the brother SE600. This feature comes with a built-in USB port used to transfer embroidery designs to the sewing machine.

You can download the latest embroidery designs from their official website ibroidery.com or other websites, provided they have a file extension supported by the sewing machine. You can import designs with .pes file extensions.

The SE600 comes with integrated lighting to prevent you from avoiding dim lighting areas or late evening plans.

Brothers use very bright LEDs around the needle section to help you see what you sew, where the fabric can be moved freely and help in deeper fabrics. Found, mostly when the deep thread is used.

display. The company says Save Smart Touch Screen because you can edit and preview the embroidery design on the touch screen before sewing.

It saves your craft plan in the embroidery design you didn’t want because you can always preview it before the final sewing.

The sewing machine has internal memory with over 80 embroidery designs that give you a large selection.

However, if that’s not enough, you still have the option to download any design of your choice from the Internet and transfer it to the machine’s system with a USB cable or memory stick.

Whether you need an embroidery machine, a simple sewing machine, or a surgeon, Brother’s first company that comes to mind.

Not only sewing machines, but Brother Brothers is also a well-known brand for printers and computer equipment.

The company builds its products after much research and customer feedback.

The sewing as mentioned above machine models are just one example; the company has many excellent models in the product line.

They make sewing machines easy to use with many automated features that easily help everyone use them.

Pros and Cons of Brother SE600

Comparing Brother SE400 vs. Brother SE600 sewing and embroidery machine, you will see that Brother SE600 is the newer and better version. It looks like the brother is working on shutting down the SE400 at several major retailers.

In my opinion, the biggest difference is how the pattern is transmitted. On the SE400, the machine has to be connected to the computer via a USB cable to transfer the pattern, and the SE600 only needs a USB stick plug. It’s much easier for me not to have my computer near my machine.

On both, the hoop size is 4″ x4″. Sewing speed, machine setup, and how you sew are all the same. check out the best embroidery machines for small businesses,

The sewing machine is not bad for home use, and it has all the features one would need in an embroidery machine. It has 80 built-in embroidery designs and 103 built-in stitches.

With a USB port, one can always add more embroidery designs. In addition, the 3.7-inch color touch screen that lets you preview the design gives a much better idea of the final result.

It serves two purposes, embroidery as well as regular sewing. So if you buy a single-purpose machine, you don’t have to spend extra money to buy another one separately.

Brother SE600’s joint embroidery and sewing machine are quite affordable and affordable.

Freuquently Ask Questions by Our Customers

What replaced the Brother SE600?

Brother SE400 is the best replacement is Brother SE600

Is Brother SE600 good for beginners?

Brother SE600 is a machine that a beginner can use. Well, the answer is Yes. If this is your first time using or maybe it’s just your first time on a computerized sewing machine, then this is exactly what you need.

Can We quilt with the Brother SE600?

What format does Brother SE600 use?

What type of bobbin does Brother SE600 use?

Brother SE600 machine uses SA156 bobbins which are class 15 type bobbins. Use of any other bobbin may result in injuries or damage to the machine.

Can we upload your own designs to Brother embroidery machine?

You can upload your own designs. You save them on a USB storage drive and stick the key into the side of the machine.

If you have any questions leave the comments or you can visit our social channel for more updates regularly.

Get embroidery digitizing cost estimation for free within few minutes.